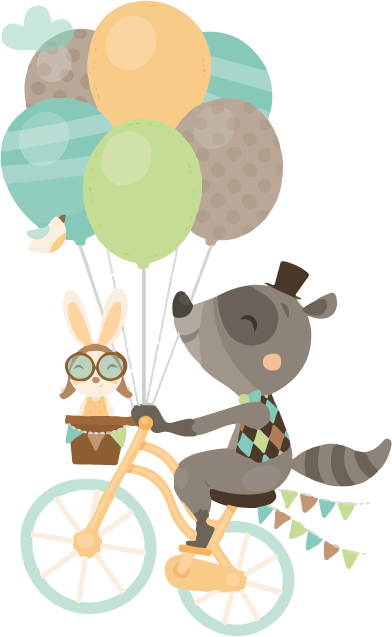 A New Friend for Ron

Ron the Raccoon felt lonely until he comes across a duck. The two become best friends until the duck is nowhere to be found. He’ll find her looking after her eggs. Now Ron has lots of new friends!

Every day looked pretty much the same for Ron the Raccoon.

A healthy breakfast, followed by a ride on his bike, then lunch, dinner and bed. Day-in and day-out.

Went the racoon, sitting by his window.

“I wish my days could be a little bit more interesting and a lot less lonely.”

A tap-tap-tap from the front door woke the raccoon from his afternoon nap.

“What’s that?” he wondered, and he slowly got up.

“Yes?” said Ron as he creaked open his front door.

Went a little duck, standing on Ron’s doormat and wiggling her feathery tail.

And she walked in as if Ron’s house was, in fact, her very own.

“Outstanding!” muttered the incredulous raccoon… but a little smile was starting to appear on his face.

From that day on the two became inseparable.

Ride the bike together,

Ron read his favourite adventure books to Duck, while Duck taught Ron how to swim in her favourite lake.

Ron’s days were now filled with fun, feathers and friendship. And he loved it.

Duck was nowhere to be found.

Ron looked for her around his house.

He looked for her in his garden.

He even knocked on every door of his neighbourhood looking for his best friend.

With his head full of worries and his heart full of sorrow, the lonely raccoon went back to the lake where Duck had showed him how to swim.

He remembered how much they laughed as he’d clumsily splashed around.

He could almost see the ripples and the waves that they’d made as they played in the water.

He could almost hear Duck squawking away, giving him instructions.

“I remember her voice so clearly,” said Ron, “it’s almost as if she’s here!”

And he shot up and started to look around.

He followed the sound that seemed to come from behind a big bush. He pushed the branches aside and gasped.

And she lifted her wing, revealing three fluffy (and very noisy!) ducklings.

“So, that’s why you disappeared!” said Ron, “you were busy looking after your eggs!”

And from that very moment, Ron’s life was never the same.

As he now had not one, not two, not three, but FOUR best friends.

Four best friends who waddled into Ron’s house as if it was their very own.

And Ron was OK with that.