Buying cotton items for your home and family seems like a good choice. After all, it’s a natural fibre, so it must be better for our bodies and the environment. Right?

But unfortunately, depending on how that cotton has been grown and then produced into your purchased item, your choice might not be as safe as you’d hoped. You see, the growth of what we’ll call conventional cotton has developed over time to include some harmful practices, the effects of which have only relatively recently begun to be understood. 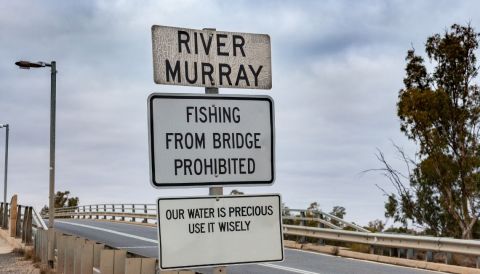 Impacts on the environment from such practices include:

Major ecosystems like our own Australia’s Murray Darling River has felt such impacts severely.

So, our article today is going to explore the problem of pesticides in particular, in conventional cotton growth.

How widespread is pesticide use?

Australia, Pakistan, India, China, Brazil and the US account for around 80% of the cotton produced. This ranges from large, mechanised production of cotton, to smallholders who are less technologically advanced. To give you an indication of how many livelihoods depend on cotton farming: cotton is the mainstay of around 100 million rural families worldwide. In 2017-2018, it is estimated that 24,978 metric tonnes of cotton was produced globally.

Although you’ll find it grown on 2.5% of the world’s agricultural land, cotton actually consumes a staggering 16% of all the insecticides sold worldwide. It’s cotton pesticides statistics like these that demonstrate just how pesticide-intensive this crop is. 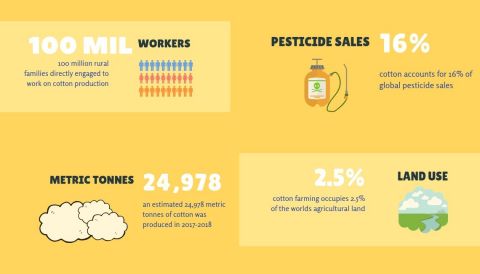 In fact, conventional cotton is the fourth-largest consumer of chemicals for agricultural use. Pesticides are used to control insects and arthropods, fungal diseases and weeds, so they don’t interfere with crop growth, the economy of the cotton industry and the livelihoods that depend on it.

Pesticide-use reached an all-time high in the 1980s, and although insecticide and herbicide use has been (for the most part) declining, some areas are unfortunately showing an increase.

While measures are being taken to restrict pesticide usage across many countries, (thanks to initiatives like Better Cotton Initiative, Fairtrade and Organic, and practices like Integrated Pest Management), there remains a significant problem in developing and under-regulated countries.

It is believed many smallholder farmers are using pesticides unsafely, even those agrochemicals which have banned. An obvious underreporting problem exists, which makes it challenging to understand the full extent of pesticide usage.

What pesticides are being used?

FAO/WHO defines a pesticide as “any substance of chemical or biological ingredients intended for repelling, destroying or controlling any pest, or regulating plant growth.” They are deliberately released into the environment to control a specific pest from a particular environment. 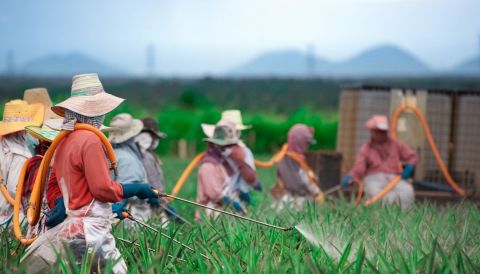 Because there is such a vast selection of pests, weeds and diseases (not to mention the growing environments), over one thousand different chemicals have been used as pesticides, with the agrochemical industry continuing to develop in this space.

Insecticides, fungicides and herbicides are the three primary types of pesticides being used on conventional cotton crops.

Pesticides can be systemic in that they are absorbed by the plant’s entire system, from roots to fruits and flowers. Scarily, they can even survive into the developing seed.

Alternatively, pesticides may be non-systemic, in that they remain on the target area of the crop - for example, their roots or foliage. Non-systemic pesticides are therefore more vulnerable to the elements - whether that be UV light, heat or water.

Unfortunately, while pesticides may be categorised as broad-spectrum or narrow-spectrum, most tend to affect more than just the intended crop, causing harm to non-target species thanks to their non-selective actions.

A survey by the ICAC Technical Information Section, of the 30 major cotton industries, revealed the most-used active ingredients for pesticide use in cotton.

These include organophosphates (insecticides) such as:

Pyrethroids (insecticides) such as:

Neonicotinoids (insecticides) such as:

The impacts of pesticide-use

Rather than just saying “pesticides are harmful, pesticides are dangerous” we want you to feel as though you have a thorough understanding of the many ways in which they can affect our health and our beautiful earth.

Along with eliminating the pests cotton farmers choose to target, they also eliminate other species that aren’t the target. They eliminate the natural enemies of the targeted pests, which reduces biodiversity by interfering with an ecosystem. This provides the opportunity for secondary pests to increase and then become the primary ones.

Washing pesticides out of the soil pollutes groundwater and our natural waterways like rivers. 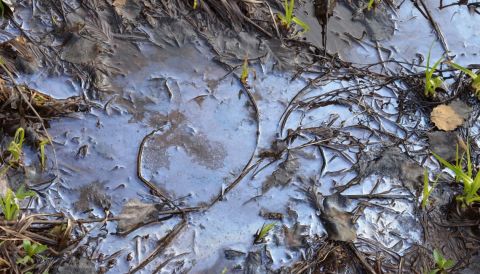 Pesticide use on cotton impacts other industries too, like commercial bee pollination for almond production where insecticide spray drift from the cotton farms kills the bees. It can affect cattlea, too, resulting in graziers having their properties quarantined. Pesticide use can also affect frog reproduction. While (in Australia) there are buffer zones now in place to reduce the incidence of these impacts, accidents can happen and it doesn’t disprove the danger of these chemicals.

As for human health concerns:

Despite regulatory efforts, poor practices continue in the production of cotton. In less regulated countries, children can be found applying pesticides, and there are problems in the routine use of personal protective equipment. Re-using empty pesticide containers still happens, and this, of course, provides high exposure. A lack of adequate equipment and knowledge about appropriate pesticide handling is thought to be a significant factor in both illness and death caused by pesticide poisoning. “ Occupational poisoning levels are high with as many as 42% of farmers reporting signs and symptoms of pesticide poisoning.”

Pesticide use damages the natural fibre of the cotton, weakening it and reducing its lifespan. But what is most concerning is that traces of the chemicals can remain in the items when you purchase them. These may then be absorbed into the skin because the residual amounts are released as the fibres degrade.

A study showed that washing protective clothing which was worn by workers during the use of pesticides did not remove residue, even with six washes. Between 1% and 42% of the residue remained.

Exposure and cotton pesticide poisoning can manifest in a variety of ways depending on the type of pesticide, as well as concentration and duration of exposure.

A brief description of four of the world’s most common pesticides and their impacts follows:

Acephate is a broad-spectrum insecticide, generally used to spray foliage and control insects that chew or suck, like aphids. It is a recognised irritant, causing overstimulation of the nervous system in humans and a rapid heart rate. Accidents or major spills resulting in high exposure can cause respiratory paralysis or death. Environmentally, the most significant impacts are toxicity in bees and other insects because of its broad-spectrum nature.

This insecticide is non-systemic and works by contact or ingestion. It is used against common household pests like cockroaches, ants, beetles and spiders to alter their nerve function, paralyse and eventually kill them. As a neurotoxin, it is highly toxic to mammals, including humans. Agricultural workers often experience allergic reactions by skin exposure. Acute effects include dermatitis, vomiting and tremors. It’s a risk to aquatic organisms and bees.

A broad-spectrum herbicide that is non-selective and because of its high water solubility can have a big impact on aquatic ecosystems, including fish, amphibians and molluscs. On land, it impacts plants, earthworms, bees and birds. Glyphosate is used to control a wide variety of weeds and grasses and is used on about 80% of genetically modified crops (not just cotton).

It works by blocking the production of essential amino acids. Among other effects, it is an irritant to the skin and eyes and disrupts vital functions in humans like reproduction, immunity and neurology.

In Australia, we are particularly reliant on glyphosate for weed control.

This broad-range insecticide affects organisms by contact or ingestion and interferes with nervous system function. It is used to target aphids, leafhoppers and ground beetles, among other insects. Because of high water solubility, it can leach in soil. It is highly toxic to bees and moderately so to birds and mammals. As for the effects on humans, poisoning by inhalation or skin contact may result in symptoms such as irritation to the eyes, diarrhea and dizziness.

A roundup of cotton pesticide statistics

As a quick reference, here is a selection of cotton pesticide statistics from quality sources:

Embracing the alternative to conventional cotton

Learning the truth about pesticide use for conventional cotton and reading these cotton pesticide statistics can certainly be alarming. But, rather than turning a blind eye, we encourage you to turn toward an alternative to these products. Every mindful purchase that you make is a step in the right direction to make your voice heard and lead the conventional cotton industry towards safer practices and producing safer products.

So, what is this alternative we speak of? Well, it’s organic cotton.

Organic cotton is grown without the use of synthetic chemicals or genetically-modified seeds.

If we were to produce organic cotton worldwide, we would see these benefits:

For farmers, this means:

For traders and retailers this means:

For the consumer, this means:

But, unfortunately, buying organic isn’t always simple or what you’d expect. For, “ in some cases, organic cotton is processed using the same dyes, fabrication and finishes as conventional cotton (unless stated on the product label).” Additionally, organic cotton may still be produced with natural crop management tools like sulphur dust and nitrogen. Organic cotton products may also contain varying percentages of cotton that is truly organic.

The only way to make sure what you’re getting is organic is to buy GOTS and Oeko-Tex certified organic cotton products.

How to know if products are GOTS and Oeko-Tex certified?

The Global Organic Textile Standard (GOTS) is recognised as the world's leading processing standard for textiles made from organic fibres. It defines high level environmental criteria along the entire organic textiles supply chain and requires compliance with social criteria as well.

GOTS restricts the use of harmful and potentially harmful chemicals, to keep workers, manufacturers and consumers safe.

Certified products should carry the GOTS label. You can also verify this by visiting the GOTS database.

It’s important to note that retailers are not required to be GOTS certified, as long as they have not altered the article provided by their supplier. All participants in the textile supply chain, right up to the production of the final product must obtain certification for the product to rightfully carry the GOTS label.

In addition to GOTS, you can look for the OEKO-Tex Standard 100 certification label. Based on the intended use of the product, the OEKO-Tex standard places limits on what substances can be used in the production of a textile - from raw fibre to finished item. It does this by testing at all stages of processing to ensure a product is safe for its intended use.

Cotton pesticide statistics reveal alarmingly high usage on conventional cotton, and can only hint at the extent of poisoning that occurs from their use.

And to learn more about how to choose safe organic cotton products for your family, check out our blog post on what is GOTS .