Are Sour Patch Kids Vegan? What To Look Out For When Choosing Vegan Lollies? 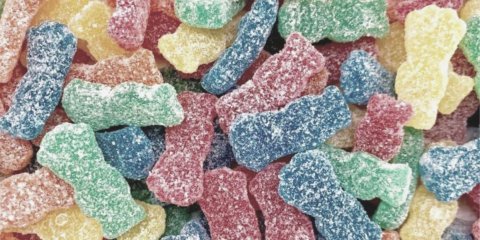 One of the hardest aspects of being vegan is realising that many of the lollies and sweets you once innocently enjoyed contain animal products. While it is certainly possible to find vegan lollies, the sad truth is that most lollies are not vegan.

Are Sour Patch Kids vegan? Sour Patch Kids are listed by PETA as a vegan-friendly treat and its true that none of the ingredients listed contain animal products, in particular gelatine. However, some controversy exists as an alternative gelling agent is not listed either which has raised questions.

Vegans know to look out for gelatine in confectionery ingredients lists, and Sour Patch Kids noticeably do not list gelatine as an ingredient. However, there is also no alternative gelling agent like agar agar or pectin. Let's take a closer look at these ingredients.

Common Lolly Ingredients To Look Out For

Determining if a confectionery item like Sour Patch Kids is vegan-friendly involves taking a closer look at typically problematic ingredients found in lollies. The most controversial lolly ingredients include the following:

Gelatine is the thorn in the side of every vegan with a sweet tooth. Commonly found in lollies, puddings, jellies, marshmallows, and other sweets, gelatine is made by boiling the bones, ligaments, tendons, and skin of pigs and cows.

Not only is gelatine not vegan, but since it directly contains animal products (not animal by-products like eggs, milk, and honey) it is not even suitable for vegetarians.

When it comes to Sour Patch Kids many people - including multinational organisations like PETA - consider Sour Patch Kids to be vegan since gelatine is not listed as an ingredient. However, it is noticeable that there is no alternative vegan-friendly gelling agent like agar agar or pectin included in the ingredients list.

Previous enquiries made of the company that manufactures Sour Patch Kids have found that - despite many websites claiming otherwise - Sour Patch Kids are not certified vegan, and the gelling agent used in their production is not listed on the ingredients list as it is a proprietary formulation.

When an analytical laboratory dissolved Sour Patch Kids lollies in various solvents, they found gelatine to be present and estimated that the lollies are constructed from at least 1% gelatine.

Sugar is an obvious confectionery ingredient and irrespective of being vegan or not, intake of sugar should be moderated especially with younger children .

Many people don't know that some types of sugar can be problematic for vegans. While some sugars are vegan-friendly, refined cane sugar in particular is not considered vegan as the refining process involves the use of charred cattle bone.

Flavours used in lollies and other confectionery items are another problematic topic for vegans since natural flavours can come from either plant or animal sources.

When manufacturing companies do not list the specific natural and artificial flavours used to create their products (as is the case with Sour Patch Kids) there is no way of knowing the origin of the flavours used.

Yet another controversial confectionery ingredient is colours. Some colours like carmine are created by crushing the bodies of cochineal bugs and must be specifically avoided by both vegans and vegetarians.

Other colours are not created from animal products but involve animal testing, which can be equally as problematic for some vegans.

While it seems unusual to consume petroleum in confectionery, there is nothing specifically non-vegan about it. However, petroleum-based colours are tested extensively on animals, from mice and rats to dogs.

The animal testing primarily includes feeding the colours to the animals and monitoring them for health problems caused by overconsumption.

On a related note, many artificial colours including yellow 5 and 6, blue 1, and red 40 are restricted or even banned in some European countries due to suspected links with health conditions in humans including cancer and ADHD.

Sour Patch Kids lollies are manufactured using different companies in different countries, so ingredients lists can vary. Indeed, some countries - such as the United Kingdom - specifically list gelatine as a Sour Patch Kids ingredient. It is always important to check the list of ingredients on the specific packet you're considering consuming as regional differences can occur.

As a gummy style lolly, some form of gelling agent must be used, yet this information is treated by the manufacturing company as "proprietary." Additionally, issues relating to animal testing and the origins of the colours used to create Sour Patch Kids make this confectionery item problematic for vegans.