Are Trampolines Safe For Toddlers? 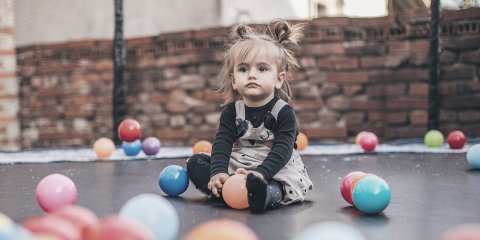 Trampolines have long been a mainstay in family backyards. They’re so much fun, after all! But at what age is it appropriate to really introduce your child to a trampoline.

Are trampolines safe for toddlers? It might come as a surprise to you, that children under 6 years of age should not be using trampolines - according to the experts.

You see, trampolines were originally developed for acrobats and gymnasts to train (back in 1945). They were not made for kids - that is, until marketing and mass production meant trampolines could be used for leisure. But just because they can be used by toddlers for backyard fun, doesn’t mean they should be.

What are the safety guidelines for trampoline production and use?

There is a voluntary Australian Standard 4989-2015 (Trampolines for domestic use) which pertains to design and manufacturing of home trampolines. Specifically, this Standard governs safety labelling, design of the padding and springs, as well as protecting any sharp edges.

While this is a step in the right direction, it does not (and cannot) address the key issues that put toddlers at risk on trampolines. Indeed, a review published by the Public Health Association of Australia in 2015 states that “ trampoline‐related injuries can, and will continue to, occur on products that fully comply with the mandated Standard.”

As for trampoline use, the American Academy of Orthopaedic Surgeons issued a position statement setting out the following guidelines :

Who says trampolines are not safe for toddlers?

Medical and parenting authorities are in agreement that trampolines put toddlers and young children at risk. Even when appropriately supervised. Even when you follow the safety guidelines.

Now, let’s look at why they make the recommendations that toddlers and children under 6 years of age shouldn’t jump on trampolines .

Why do experts say trampolines are not safe for toddlers?

According to the American Academy of Pediatrics, “ individuals younger than 6 years accounted for 22% to 37% of individuals with a trampoline-related injury presenting to emergency departments for evaluation.”

That’s a high proportion. And mostly, it comes down to physiology.

You see, young children have underdeveloped :

That means they are less capable of protecting themselves and getting out of harm's way than older children.

Research shows toddlers also appear to be more prone to fractures and dislocations - that is, they tend to suffer bone-related injuries rather than soft-tissue injuries like sprains and contusions.

Being smaller in size puts toddlers at greater risk of injury when multiple users are on the trampoline. “Approximately 75% of trampoline injuries occur when more than one child jumps at a time, and the smaller child is approximately 14 times as likely to be injured as the larger one.”

So, you see, because these reasons are physiological, no matter how many safety measures you put in place, or how well you supervise your toddler, you can’t necessarily prevent injury.

How many children are injured in trampoline accidents?

A review by the Public Health Association of Australia in 2015 found that from 2002 to 2011, there were 15,636 trampoline injuries requiring hospital visits .

How do injuries occur?

Falls are the leading cause of trampoline injury. And, as you can imagine, falls from the height of a trampoline will have a bigger impact on toddlers than on older children. 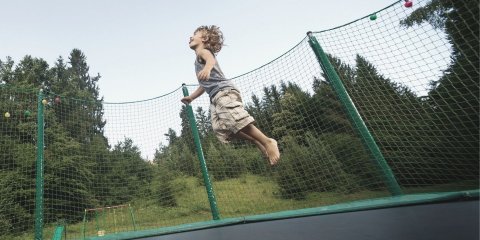 Cervical spine injuries can be caused when flips or somersaults are attempted on the trampoline. If your toddler watches older children on the trampoline, or if they are quite acrobatic in nature, they may attempt these risky moves.

Many injuries also result from multiple users being on the trampoline. Although it may be tempting to have an older child (or parent) on the trampoline “supervising” your toddler, this places them at risk in two ways.

Firstly, collision with another person can be a cause of injury when there are multiple users.

Secondly, there’s the issue of double bouncing. Double bouncing “effectively increases the height of the fall” when one child is of larger mass than the other. That’s because the heavier trampoline user will be able to create more recoil of the mat than the smaller user’s body will be able to absorb. In fact, the force generated may even be more than if your toddler was landing on solid ground - a scary thought.

Aside from the obvious ways injuries can occur, it’s also important to note that toddlers’ bones simply aren’t strong enough yet to withstand the forces of repeated jumping . This puts their spine and brain at risk.

Although the presence of safety netting should theoretically decrease the number of injuries by falls, this is not yet the case. It is believed that netting installed incorrectly or not maintained properly is one reason. Alternatively, children who are tempted to cling to or even climb the netting are at risk of injury. In fact, an Australian review concluded that “ netted enclosures – could contribute to the risk of injury by leading parents to falsely believe that a netted enclosure eradicates the risk of injury.”

Final thoughts on whether trampolines are safe for toddlers

Although there is a voluntary Australian Standard in place for trampoline design, and even if you follow all safety guidelines, trampolines are unfortunately unsafe for toddlers.

Although this might be difficult for your toddler to understand, it’s recommended you wait until after 6 years of age before allowing them on a trampoline.