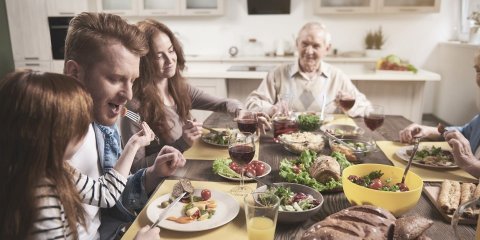 It’s so helpful when toddlers are able to eat what the rest of the family is eating. After all, no one wants to cook multiple dinners each night.

But what about if you’re cooking Coq Au Vin or Beef Bourguignon? These are traditionally cooked in wine, so can toddlers eat this food too?

It’s commonly believed that it is ok for toddlers to eat food cooked in wine, because wine is “cooked off” when heated. But, unfortunately (and perhaps inconveniently) this is a misconception. While some of the wine is cooked off, not all of it is, meaning alcohol does still remain in the dish.

What are the effects of alcohol on children?

Children are a group “considered to be particularly vulnerable to ethanol .”

Alcohol can cause falling blood sugar levels, leading to irritability, and in worst cases, seizures. Repeated exposure can cause developmental delays because of how it affects the brain.

In the 60s, it was considered fine to give children meals that had been cooked in wine . The Journal of Agriculture published an article that said as much.

But, times have changed. A more recent publication indicated that “ care must be taken with meals cooked with alcoholic drinks since they can be consumed by the paediatric age group, abstinent alcoholics, or ethanol sensible individuals.”

Because alcohol has a lower boiling point (78 degrees C) than water (100 degrees C), it’s assumed that its rapid evaporation means the alcohol burns off quickly. However, the alcohol molecules bond with water and other liquid molecules, so they actually don’t all burn off at the 78 degree C mark.

The amount of alcohol remaining in a dish can be calculated by formula. It depends on the length of time the meal is cooked for, and of course, the concentration of ethanol present in the wine to start with.

Two examples are given: “for fish stew cooked for 45 min in a covered pan where the wine was added in cold ingredients, alcohol retention was 30%, whereas for beef bib and hunter rabbit with red wine added to boiling ingredients and then cooked for 1 h in a covered pan the ethanol retention was 5%.” You can see that the remaining alcohol contents vary considerably with these two examples.

The process of alcohol evaporation while cooking looks something like this:

Instances when large quantities of alcohol may remain

There are occasions when larger quantities of alcohol may remain in meals than those mentioned above.

For example, if wine is added to a dish and not heated after that point, or not cooked at 78 degrees C or above, the ethanol will not evaporate and the alcohol content will remain.

Or, if very large quantities of wine were added while cooking, the bulk of it may not have time to evaporate.

These are instances when it’s particularly important not to allow toddlers to eat food cooked in wine.

Why do we use wine in cooking?

There are a few reasons why we use wine in cooking . It adds complexity to the flavour of dishes like casseroles, and can even improve the aroma of dishes thanks to the wine’s bouquet.

Wine can also improve the texture of what we’re cooking. Using wine in cheese fondue, for example, prevents the cheese from coagulating and becoming stringy.

Alternatives to wine in cooking

If you’ve decided not to allow your toddler to eat food cooked in wine, then you might be wondering what you can substitute in its place. To choose a suitable substitute , it’s helpful to think about why the wine was included in that recipe.

Here are a few options :

However, please note that wine vinegars still contain trace amounts of alcohol, but less than if you were cooking with wine. Usual levels of remaining ethanol in red wine vinegar come in between 0.5% and 2%.

Cooking wine that you can purchase from supermarkets still contains alcohol and many brands are also high in added sugars, salts and preservatives.

Final thoughts on whether toddlers can eat food cooked in wine

At the end of the day, it is a personal preference what food you serve your toddler. If you’re confident that your dishes are cooked for long enough that 95% of the ethanol has evaporated, you may consider serving it to them.

However, with the known risks of children consuming ethanol, allowing toddlers to eat food cooked in wine is best avoided.