Can Toddlers Sense Pregnancy? And How Do They Feel About It? 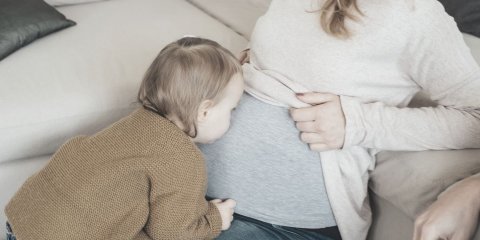 There’s a lot of anecdotal evidence that toddlers can sense your pregnancy. But, can that really be true?

Despite many people sharing their own stories online, there doesn’t appear to be a scientific basis that toddlers can sense pregnancy as such. However, it’s true that your toddler can sense change and stress.

There’s a variety of anecdotal evidence out there.

Toddlers may start doing things like rubbing or cuddling your tummy out of the blue, causing you to think that toddlers can, indeed, sense pregnancy.

Others think that toddlers can sense pregnancy, not so much by acknowledging that you’re growing another baby, but by being more clingy, acting out or “regressing”.

It’s certainly endearing to think that our toddlers can tell when we’re expecting, but, as one forum commenter put it - it might be self-selective to focus in on this one thing that they said - and were right about.

After all, there might also be many occasions when toddlers think someone is pregnant, but they aren’t. People are far less likely to share this kind of story!

It could be possible that toddlers have heard talk about you trying to conceive a baby. Similarly, they could have overheard a hushed conversation between parents that yes, they might be pregnant this time.

Toddlers are perceptive. It’s fun to think they might have sensed a pregnancy, but it’s possible they made a lucky guess because they’ve been hearing about “a baby”.

Toddlers may not sense pregnancy, so much as they can detect any stress you’re feeling.

Research has found that many pregnant mothers are “ more anxious than usual.” They often admit to being more moody and tired than before. It’s presumed that a mother’s anxiety can be induced in her toddler, who may display behavioral changes like sleep disturbances and increased tantruming.

When you’re pregnant, things change. You might suffer from tiredness that means you don’t have the energy to do all the same activities you used to do with your toddler. You might be taking short rests throughout the day that you never took before.

If you suffer from morning sickness, your toddler is going to notice when you dash to the toilet, or find it difficult to eat. This is new behaviour that they aren’t used to.

The level of attention you provide your toddler might even unconsciously shift as you start to contemplate life with multiple children.

All of these changes will be apparent to your toddler who may not necessarily sense the pregnancy, but that something new is definitely happening.

When to tell your toddler your pregnant

One thought process is that it’s important to tell your toddler when you’re happy for everyone else to know the news. After all, they do like to mimic what we say, so they will likely be saying “baby” quite a bit once you’re talking to them about your pregnancy. So, if you’re concerned about miscarriage, and would rather not share the news with others until then, it might be best to keep it quiet from your toddler until 12 weeks if you possibly can.

In fact, pregnancybirthbaby.org.au recommends waiting until later in the pregnancy anyway, “when they can see what is happening”.

But, on the other hand, a small study of Chinese families found that “firstborn children who were told earlier in their mothers' pregnancy were more likely to have positive feelings about their sibling before the birth”. Therefore, it might be best to start telling your toddler as soon as it is practical for you.

How toddlers feel about pregnancy

Even if toddlers are excited about the possibility of a new brother or sister to play with, they might start to behave differently, display anger, or even seem as though they have “regressed”. This is an attempt to regain the normalcy of life , where they perhaps had a higher level of attention.

You are probably going to be changing some things around the house during your pregnancy in preparation for the baby’s arrival . For instance, you might be moving some of the furniture, like a cot and rocking chair from your toddler’s room, into the new nursery. If you say that the baby needs these things, your toddler might think you are taking things away from them as though the baby is more important.

Instead, try to explain it in terms of positive development for your toddler. Like “you are growing so big, it’s time to get you a big kid bed!” Or “you love to read so much, we’re going to make you your very own reading nook where the rocking chair used to go.”

Help them see it’s not all about the new baby, that they are still important too. Throughout your pregnancy and once the new baby arrives, it’s important to help your toddler feel secure and good about themselves. A toddler who feels secure is going to behave better, but this will also inform how their self-confidence builds throughout their life.

What do you think - might toddlers have a sixth sense about pregnancy?