Effects Of Screen Time On Toddlers - Should You Be Worried?

With smartphones, tablets, smart TVs and gaming consoles in most Australian households, our kids are certainly growing up in a digital age.

Show any child a screen and they are mesmerised (much like we are). That’s what makes it so easy to flick on ABC Kids when you need to get dinner in the oven, or pass them your phone at a cafe so you can enjoy some adult conversation.

68% of children under age 3 use screen media, such as television, DVDs and video games, on a daily basis.

I can only imagine this percentage has increased in our households recently, given the self-isolation and work-from-home directives we're currently experiencing in the face of the COVID-19 pandemic.

But, are we exposing our toddlers to too much screen time? Is it time to set the devices down and get back to basics?

In this blog, we’re going to look at what research says the real effects of screen time on toddlers are. Specifically, we’ll explore this from the following perspectives:

Finally, we’ll also help you find a way to better manage screen time at home for your toddler, and the rest of the family.

Social development is an important part of growing up. It’s critical to how we relate to others and find our place in the world. The COVD-19 pandemic has reminded us that we are very much social creatures who depend on each other. 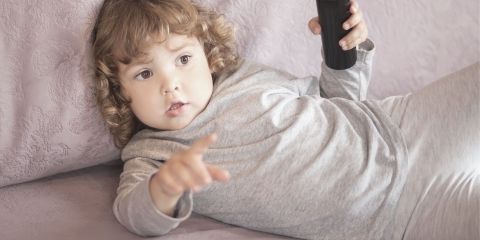 Sadly, the effects of screen time on toddlers can be quite isolating . Screen time takes away from family time or time at play. It disrupts the verbal and non-verbal exchanges that would ordinarily be taking place between toddler and parent or other caregiver.

It can also encourage behaviours we would prefer not to. We’re not saying that watching TV is going to make your child violent, but it is indicated that exposure to violent content (whether on the news or in movies) can normalise aggressive behaviour . This isn’t helpful for toddlers who are trying to make sense of the world.

Of course, independent play is important too, but we’ll look next at why using devices isn’t necessarily the right type of play.

Child development is rapid in the first five years of life - this means it’s a critical time to master major aspects of development, like gross motor skills.

Gross motor (physical) skills are those which require whole body movement and which involve the large (core stabilising) muscles of the body to perform everyday functions, such as standing and walking, running and jumping, and sitting upright at the table.

But, they extend beyond this, to more athletic abilities like kicking, catching, throwing, swimming and riding.

This study used a parent-reported screening measure to determine if there is a link between excessive screen time and development delays . One aspect of the screener related to gross motor skills. Results confirmed that toddlers aged 2 and 3 who were receiving higher levels of screen time had poorer performance in the developmental screening test undertaken at 3 and 5 years of age. 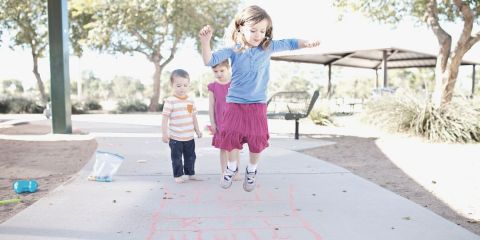 So, why is this the case?

It’s believed that the time spent in front of devices is taking away from the time toddlers need to learn , practice, and ultimately, master those gross motor skills like walking. That’s because instead of undertaking the behaviours crucial to reaching developmental milestones, they are instead sedentary. This isn’t natural behaviour for toddlers and can even have knock-on effects when it comes to their health, which we’ll look at a little further on.

Storytime is an essential and much-loved part of childhood . It can help shape the ability to read, but also a love of books as your toddler grows.

So, how do ebooks fit in? And how do the effects of this type of screen time impact toddlers?

Several studies have found that when young children (aged 3-5 years) are read to from ebooks rather than traditional paper books , they end up with lower reading comprehension.

But ebooks aren’t the only device-driven stories on the market. There are also stories told by smartphones and tablets. This type of reading “spoon-feeds images, words, and pictures all at once to a young reader”.

Essentially, all the thinking is done for your toddler - their imagination doesn’t get used and cognitive muscles don’t get the workout they sorely need. This is a completely different experience to you reading to your toddler from a traditional book, where your child must first process your voice into words, contextualise their meaning, visualise what is happening beyond the pictures (sounds etc) and ultimately, follow a storyline.

The experience offered by a device lacks you pointing things out on the page, talking about the story as you read through it and also turning pages, which is a developmental milestone in itself.

We’ve talked about reading comprehension, but what about the effects of screen time on toddlers’ speech ? A cross-sectional study in 2011-2015 explored this very idea, using parent-reported data on their 18-month-olds. The study looked only at children who were reported to have mobile media device use, and the average of this turned out to be 15 minutes per day.

Of those children who had mobile media device use, 6.6% were reported to have expressive speech delay , for example, they were late to begin talking. A further 8.8% showed other communication delays, such as a lack of using eye gaze and gestures.

One suggested reason for this, according to prior research, is that young children:

have difficulty applying what they learn across different contexts

But, it’s also likely that the reduced time spent communicating with parents and other caregivers plays a role here too.

The effects of screen time on toddlers don’t only relate to their development. You see, the habits that form around watching TV or using mobile devices can also be detrimental to their health .

Just for a moment, think back to the last time you watched a movie or binged on Netflix (we know, you don’t do this nearly as often as you used to!). Were you munching on some popcorn? Perhaps some chips or chocolate, only to look down and realise the bag or bowl was empty?

When you eat in front of a screen, you are less conscious of how much you are eating. Because your attention is elsewhere, you miss your body’s usual cues indicating you should stop eating.

It’s the same for your toddler. Couple this with the reduced activity that usually results from too much screen time, and you have a recipe for obesity in the long-term. Interestingly, research has even found:

Screen time can also bring about some unnatural “watching” positions for toddlers. These are positions they wouldn’t normally be in, and can cause some postural pain when sustained.

A plan to reduce the effects of screen time on toddlers

So, now that you can see the breadth of effects that screen time has on toddlers, you might be wondering about the best way to reduce the time they are exposed to screens.

A strong recommendation from this study, is to implement a family media plan to manage boundaries on media use . Customised to your family, it can help to reduce the time you all spend in front of screens and maximise interpersonal time. You’ll find this type of approach particularly helpful if you have other children who are older than your toddler.

Some specific ideas for managing screen time from the Sydney Children’s Hospital Network include:

Like all aspects of parenting, you shouldn’t expect to do things perfectly. In our tech-driven world it is difficult to minimise even second-hand screen time. But, remember - at any point, you can hit reset, reassess what’s working, what isn’t and put a new plan into place to better manage screen time for your family.