How To Get A Toddler To Eat Vegetables 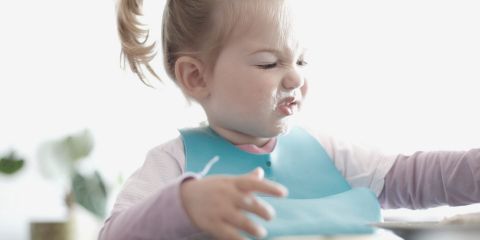 The fact that kids should eat their veggies is as old as time. Even the government-based website, ChooseMyPlate.gov , agrees with that, advising parents to fill half of their children's plates with produce. Why? Because they simply need them to get enough nutrients, grow strong, develop their brain function, and build a robust immune system that'll tackle any disease, from obesity to cancer.

Unfortunately, kids are kids, and they'll do anything to avoid eating their fair share of greens (even toss their peas into the dog's bowl). That's why 9 in 10 children didn't eat enough vegetables from 2007 to 2010. FYI, they still don't.

But, let's be honest: Your kiddo doesn't care about nutrition nor statistics. So, it can be challenging to make her eat those veggies. But, before you throw in the towel, know that there are ways to deal with this issue peacefully.

In fact, here are 19 fail-safe tips to get your toddler to eat vegetables without her putting up a fight. Some of these tips are even backed by science, so you have a pretty good shot at nailing this.

1. Embrace the Pureed Side of Life

According to a recent study by the Pennsylvania State University , preschool children tend to eat twice as many vegetables as their peers when pureed. However, I'm not a fan of "hiding" veggies inside a food because this tactic could easily backfire and turn you into the "bad guy." 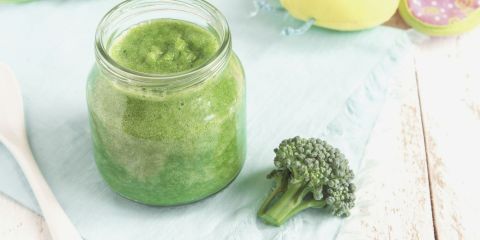 So, my suggestion is: Serve pureed vegetables alongside your kid's favorite dish to get them acquainted with the flavor and once they're used to it, move onto solids.

2. Go For Some Healthier Food Doppelgangers

Certain foods are crowd-pleasers by nature. So, trade those or tweak some of their ingredients with some healthier alternatives for a nutrient boost. For example, swap regular pasta with spaghetti squash or opt for veggie burgers instead of the meaty kind.

You can even substitute taco meat for veggie crumbles. I bet you they will barely notice the difference thanks to the similar texture and flavor.

3. Add Them to Other Foods

This is perhaps the most straightforward way to get a toddler to eat vegetables. Just add zucchini into their cupcakes, carrots, and bell peppers into their Bolognese or tomato to their omelet. 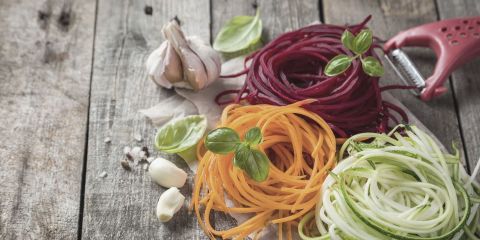 Be careful, though: You should always be honest with your kid regarding the ingredients you put in her food. Let them know that you added a specific vegetable to the mix because if she finds it out on her own, she'll be suspicious of your intentions from that point on.

Much like pureeing, juicing is an easy way to increase your toddler's vegetable intake. However, not all juices are created equal. The store-bought kind is often packed with sugar and quirky additives, which could do more harm than good. Instead, opt for homemade blends where you can control the ingredients as well as the flavor.

Also, make sure your little one doesn't slurp more than four ounces a day and right before bedtime .

As your little one gets older, you've probably noticed that she has a soft spot for all things crunchy. That's because the increased jaw resistance soothes her teething gums and provides her brain with positive sensory feedback. Following this logic, breaded vegetables can readily turn into the ultimate crunchy snack.

So, coat the vegetables of your choice with breadcrumbs, cornmeal, or finely ground almonds (for a healthier twist) and bake them in the oven until they turn golden brown. Avoid frying because saturated fats can add up quickly.

Disclaimer: I don't believe this method is 110% healthy – unless you use very little oil and opt for almond meal instead of flour/breadcrumbs. But, it could help your little one open up to new foods and fraternize with new flavors. So, practicing every once in a while is OK.

Registered dietician Jessica Ivey also suggests you add roasted vegetables to your kid's go-to dishes, be it a bowl of pasta, pizza, or tacos. This way, she will associate the roots with something positive and stop resisting them after a while. 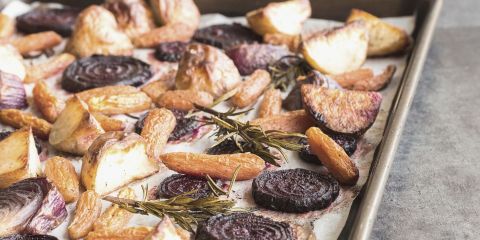 While I get Ivey's point of view, I believe pairing veggies with a kid's least favorite foods can also do the trick. And that's because your little munchkin will have to reach out for the vegetables when the only other option is something she really dislikes. So, you can try one or the other method (or even both) and see what works best on your kiddo.

7. Make Them the Main Attraction

Another foolproof way to get a toddler to eat vegetables is to make produce the star of the show. That being said, avoid serving them as a side dish, and put all the focus on them (perhaps by serving them as a salad, a lettuce wrap, or inside a quesadilla).

You know that some vegetables are bitterer than others. But, what you probably don't know is that young tongues are particularly sensitive to bitterness . That's why many kids are instinctively repulsed by vegetables.

So, if your little one complains that a particular veggie is too bitter for her palate, mask the flavor with something sweet. 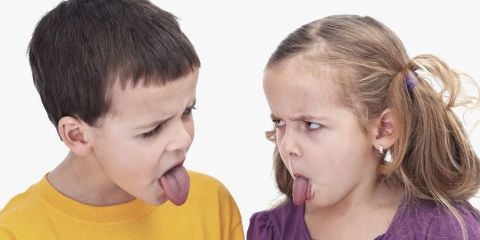 For example, blend leafy greens such as spinach or kale into a smoothie alongside a serving of banana or blueberries. Buttering them up could also work.

9. Give Vegetables a Cool Disguise

This tip is usually recommended for extremely picky eaters. And yes, I realize that playing with food seems counterintuitive when you're trying to teach your kid to appreciate it, but if all else fails, it's worth the try. 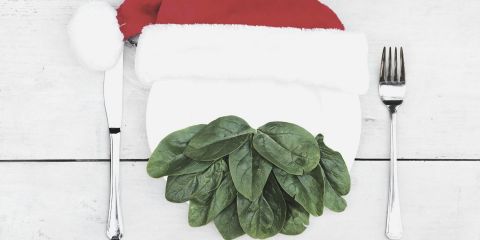 So, get your peelers, cookie cutters, and spiralizers at the ready and cut vegetables in all sorts of fun shapes, from flowers to ribbons to animals. You can even use these shapes to create a story and capture their attention 100% of the time.

10. Have Other Kids Influence Yours

Your toddler may turn her nose up at anything green. But, if her cousin or next-door friend doesn't, you're halfway there. Just pair the way and let peer pressure do its thing. Sooner than later, your mini-me will want to eat like her friend, who's in love with spinach.

11. Don't Cook Separately for Your Kiddo

Prepping two different meals regularly doesn't just mean more work for you – it also sends a subliminal message to your toddler that "kid food" and "grown-up food" are two completely different things. This may hatch a sense of entitlement in your little one, which could lead to picky eating. 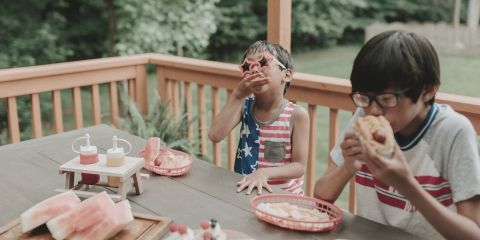 After all, why can't he/she eat the same things you do? So, bottom line: Lead by example and show them that what’s good for parents is also suitable for kids.

Recent studies prove that women who ate a lot of vegetables during their pregnancy and breastfeeding phase birthed children who favored their taste.

That's because the embryo/infant got exposed to them from the get-go, and she's not entirely unfamiliar with them. But, even if you didn't munch on kale or spinach while you were pregnant, you can still introduce them to vegetables from a very young age or as soon as the doctor gives you the green light.

Just because your little one cringed the first couple of times he/she gnawed on some broccoli, it doesn't mean you should give up. After all, research shows that it can take up to 15 (sometimes 20) exposures to get a kid to like a new food.

So, no matter their reactions, just keep serving greens on the reg. At some point, they're bound to develop a taste for them. To keep things interesting, you can serve them in different forms, e.g., steamed, pureed, and cubed, or as part of a dip, soup, or curry.

A surefire way to get a toddler to eat vegetables is to say no to snacks an hour or two before a meal. This way, they'll be hungry enough to devour anything you serve on their plate. Of course, I'm not implying you should starve your kid before dinner or insist upon them eating their veggies and nothing else.

If they are that hungry, just treat them to a bite-sized piece of the meal you're cooking for a "preview" taste (veggies included!) or half of their go-to snack.

Making your toddler part of the cooking process is another easy way to turn her into a vegetable lover. By allowing them to be your sous-chefs for the day (for example, meal-plan with you or choose how the food is cooked), they feel like they have a say in the whole process, which helps them develop a positive attitude towards food . As a result, they are far less likely to put up a fight when mealtime rolls around.

You can also make the eating process a bit more interactive (and, thus, more appealing) by serving foods that require some hands-on action, i.e., carrot sticks and hummus.

If you meal plan, you may also present them with a couple of vegetable options and ask them which one they prefer the most. This way, they'll think that somehow they've influenced your decision, but you will know that it was your choice, to begin with.

You have to understand that there's a difference between "don't like" and "don't want" to eat vegetables. So, before you shove a dollop of, say, cauliflower in your kid's mouth, ask them why don't like the particular veggie. If they say they can't stand the taste, leave it at that and don't push them any harder.

But, if they shun it because of the texture, it'd be a good idea to make some adjustments cooking-wise. Perhaps make them less mushy or crunchy, depending on their liking.

17. Don't Ever "Sneak" Veggies Into Foods

Even though "hiding" foods into meals is an easy way to get a toddler to eat vegetables, doing so only comes with short-term benefits. If your kid spots a speck of green or orange in her food, she'll most likely a) disbelieve you from now on and b) hate vegetables even more. So, whatever you do, don't "sneak" veggies into her meals (just add them here and there) and make sure she sees what she's eating.

You can also make eating vegetables fun by playing a challenge-type game with your mini-me. Next time you serve up veggies, encourage her to spot three green foods on her plate or three circular bites, and so on. The best part? Not only will she forget that she doesn't "like" vegetables, but she will also pick up a few things along the way, i.e., counting, identifying colors, etc.

By now, you probably know about the benefits of family dinners , especially when it comes to bonding.

But, research also shows that dining alongside your kiddo can increase her vegetable intake, all while reducing her cravings for fried foods and sodas.

That makes sense considering family meals are the perfect chance to share important eating values with your kids that they'll cherish for the rest of their life.