Is Tea Good For A Toddler? Here's The Research 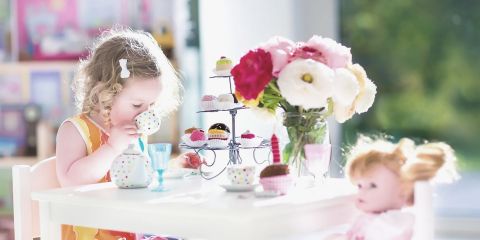 As adults, our relationship with tea is pretty straightforward. The cozy brew is a surefire way to warm up when the weather is just too cold, and it even puts an end to sniffles and fever when we're down with the flu.

Tea's are so prevalent in adulthood, does it also follow that we should be giving our kids tea, are they even safe?

Is tea safe for kids? Children after 6 months can safely drink some varieties of herbal teas, but hold back the honey until they are 12 months old. Check for polyphenols in the tea as high amounts can inhibit iron absorption in toddlers, Non-herbal teas contain caffeine which is unsafe for children under 12 months, and discouraged until age 4 or 5 when caffeine can be gently introduced but lacks consistent guidance.

Distinguishing between herbal and non-herbal varieties of tea is an important factor when considering the choice of giving tea to your toddler, as there are important differences to be considered.

Are non-herbal teas safe for children? 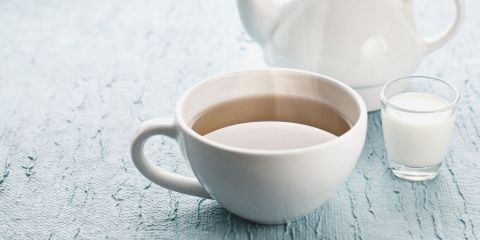 Non-herbal or "true teas" are those derived specifically from the leaves of Camellia Sinensis plant specific known as the "tea plant". The tea plant naturally occurs with caffeine in it, so there is no escaping the fact that non-herbal teas will contain caffeine.

In addition to caffeine, non-herbal teas can be quite rich in polyphenols which have some amazing properties in adults but could affect younger children negatively . More on this below.

Can kids have caffeine?

Guidance on caffeine is not 100% consistent with respect to children depending on their age, and the only guidelines that do exist, come from the Health Canada

Its important to not that these guidelines only come from Health Canada, and that there are many health care professionals that would not be recommending caffeine until adulthood .

The majority of the literature reviewed here suggests that typical, moderate caffeine consumption in children and adolescents is relatively safe, but that higher doses of caffeine consumption (>400 mg) can cause physiological, psychological, and behavioral harm, in particular in subgroups of children, such as those with psychiatric or cardiac conditions

In essence, this highlights that introducing non-herbal teas from age 5 is likely to be safe in an otherwise health child, but there are limits to be aware of.

Are herbal teas safe for toddlers?

Herbal teas are caffeine-free in contrast to non-herbal teas making them a far more suitable for younger and older kids and the perfect alternative to sweetened beverages like fruit juices, or soda's that contain far too much sugar unless mum or dad goes a little overboard on the honey.

Great! So whats the catch?

While herbal teas are generally far better for kids (in particular toddlers and babies) than non-herbal teas because of caffeine quantities, the amount of polyphenols present in the specific tea is also something to think about.

Polyphenols are a micro-nutrient that is present in varying amounts in all types of teas (herbal and non-herbal) but generally speaking, they are far more prevalent in non-herbal teas.

Polyphenols are antioxidants that give tea the ability to prevent several chronic illnesses such as cardiovascular disease and cancer. One of the most potent polyphenols in tea is epigallocatechin-3-gallate (EGCG).

Polyphenols are commonly divided into 2 major subgroups called flavonoids and phenolic acids, both of which commonly occur in tea in varying amounts depending on the type of tea. 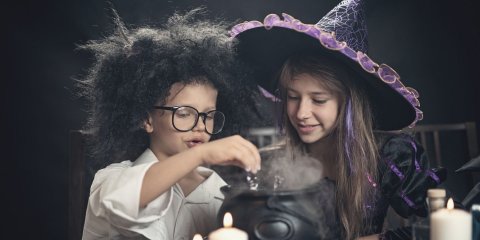 Polyphenols are somewhat revered in the medical community as an antioxidant, and for their regenerative qualities. One of the most potent polyphenols in tea is epigallocatechin-3-gallate (EGCG) which remarkably assists the body to repair itself at a cellular level helping fight diseases like cardiovascular disease and cancer.

There is substantial evidence that specific polyphenols benefit health status, especially for the prevention and management of certain chronic diseases

Several studies have shown an inverse association between polyphenols and chronic diseases such as stroke, cardiovascular diseases, metabolic syndrome, type 2 diabetes, and cancer

Consuming polyphenol-rich foods has been associated with a range of health benefits, including optimizing cardiometabolic health and to a lesser extent positively impacting brain functioning in humans

... have highlighted time and time again the positive effects polyphenols have, and should you feel inclined to turn the kettle on now, please do we will still be here.

However, there is a study by the Penn State University that looking at side effects of polyphenols and found that, certain polyphenols (including EGCG) reduce the amount of iron that your body absorbs .

Nutritional scientists found that eating certain polyphenols decreased the amount of iron the body absorbs, which can increase the risk of developing an iron deficiency

This could increase the risk of iron deficiency and related health complications such as low immunity, irregular heartbeat, and lack of energy, would effect younger children far more than adults.

Non-herbal teas like Green, Black, and Oolong contain high amounts of polyphenols, while herbal teas like Rooibos and Peppermint contain a considerable amount of polyphenols so its probably best to avoid having these types of tea's too habitually that it interferes with nutrient intake causing iron deficiency issues.

To be safe, you could avoid drinking tea immediately before meals, as this would be the time that the polyphenols are at is peak concentration and most likely to interfere.

Is tea good or bad for teeth

This might sound like an obvious question given its quite well known that tea stains teeth, however, it's not all bad news as non-herbal teas do contain substances that aid in teeth development.

Researchers have found that the leaves of the tea plant contain a certain amount of fluoride , which is -of course- infused into the water when the leaves are steeped.

It has long been accepted that fluoride accumulates in the leaves of the tea plant. Camellia sinensis. In addition it is known that some of this fluoride is released into the infusion which is drunk as tea.

The presence of fluoride occurs only in non-herbal tea varieties which are derived from the 'Camelia Sinensis' tea plant such as green and black teas which do unfortunately contain caffeine making them unsuitable for younger children like toddlers and babies.

Fluoride may sound hazardous, but it's good news for your childs teeth development as fluoride remineralizes the tough outer coating (enamel) of their teeth, making them more resistant to bacteria and acids, and thus, prevents cavities.

More reasons why tea is good for kids

For centuries now, people have been using hot tea to relieve flu-like symptoms such as sore throat and coughing. That's because the drink keeps the throat moist, reducing irritation and pain. 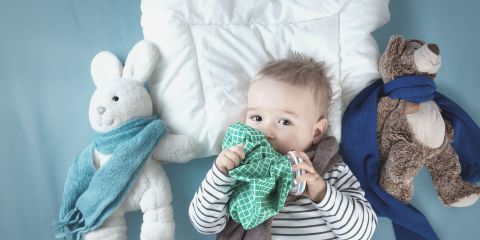 Some herbal blends also pose a bunch of anti-inflammatory properties, which suppress the damage done by microbes.

More Reasons not to give kids too much tea

By now, we all know that caffeine is one of the main components of tea. But, while the stimulant can be a blessing for adults (especially when you want to pull an all-nighter), it's not suitable for kids as it may disrupt their sleep-wake cycle by triggering specific areas in their brain.

And here's some more bad news: Since a toddler's liver and kidney are not fully developed , they need more time to process caffeine, which means they are more susceptible to its effects.

So, when you serve a cup of tea to your little one, you potentially crush their chances of getting a good night's sleep .

According to 1 study, kids that consume 1-2 cups of tea per day are more likely to develop Type 1 diabetes than their non-drinking pals.

But, don't panic just yet, since the study was very limited in scope, further research is still necessary to establish the validity of the results.

By now, you've realized that not all teas are created equal, as some varieties contain more caffeine than others. If you want to get the best of both worlds and still serve the drink to your kid (without giving them the jitters), these five teas for toddlers are your safest bet.

Chamomile is one of the safest options when you're serving tea to a toddler. The herb has a floral flavor that kids won't help but love, and thanks to its high levels in apigenin (antioxidant), it promotes sleepiness.

Chamomile is also known for its anti-inflammatory properties , which could reduce acidity in the stomach and improve your kid's digestive health.

Another toddler-friendly tea is fennel. The herb tastes a lot like black licorice, which is why many kids shun it at first.

However, research shows that it's the perfect antidote for gastric distress such as stomach cramps and colic , which is common amongst infants and tots.

One study even concludes that fennel can loosen the mucus in the lungs and ease symptoms in people with sore throat and cough.

Peppermint tea is often a hit amongst children, mainly due to its refreshing flavor. But, beyond that, the herb is often praised for its antimicrobial and antiviral properties , which could help you tot rest off a cold when they are feeling under the weather.

A member of the mint family, catnip contains nepetalactone , a compound that's known for reducing nervousness in humans and improving their relaxation.

The herb has a slightly bitter taste, which may put your toddler off. But, you could ease them into it by adding some sweetener in their cup (preferably stevia) before serving.

Avoid using honey, though, because there's a chance of contracting botulism (especially if your mini-me is under 12 months of age).

Ginger tea is another excellent option. The root poses some impressive anti-inflammatory qualities, which is why it aids digestion . Given its intense flavor, kids will either love it or hate it, so blending it with other herbs could do the trick.

3 Tips to Make Tea for Toddlers

Since caffeine will always be an issue when it comes to tea, you can minimize its effects by adding fewer leaves. This way, you'll make your kiddo's brew weaker. You can also steep the leaves for just 2 minutes (instead of 4-5), and if it turns out strong, you can dissolve it with water.

Certain varieties of tea can indeed be quite bitter to the taste. So, if your little one complains that they don't like the taste, just let it go, and don't try and lure them in by adding sugar to their cup. Just move onto another blend/brew. PS: If you insist upon using something sweet, opt for stevia leaves.

While each parent may have a different opinion on whether they should give tea to their toddlers, most agree that serving tea in a bottle or sippy cup is downright wrong. 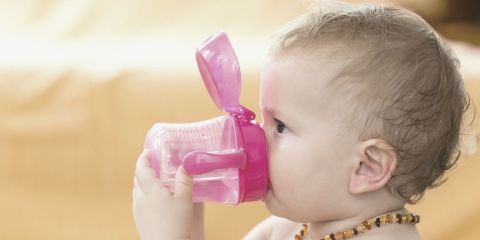 To be honest, I agree with this idea because such a habit increases a tot's risk of tooth decay. And that's because the sweetened liquid gets in contact with their teeth for longer, and bacteria are more likely to grow in the area.

Judging from the studies we've come across so far, it's easy to see that science falls all over the map when it comes to toddlers sipping a cuppa (It's bad! It's good! It's meh!). But, instead of siding with just one of these three options (and blatantly ignoring the rest), I'd advise you to consider the golden rule: "Everything in moderation." You should also consult with your pediatrician to get an OK for specific blends and brews as some of them may interact with the meds your kid is taking or the conditions she has.