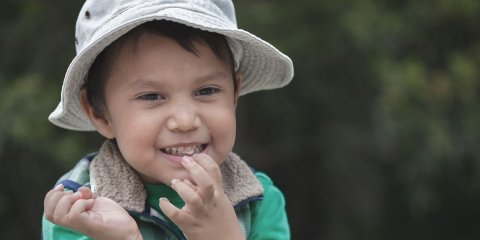 Has your toddler spotted you chewing gum and asked for a piece?

If you’re here reading this article, you might already have a hunch that chewing gum isn’t appropriate for toddlers. And your hunch is correct.

Because, with all the risks weighed, it quickly becomes apparent that toddlers should not chew gum. Even though there aren’t regulations to say that toddlers shouldn’t chew gum, the American Academy of Pediatrics, as well as other paediatric specialists, agree that children under 5 years of age, simply shouldn’t have it.

We will also look at the problem from a behavioural and developmental aspect - as toddlers are likely to swallow gum despite you asking them not to, as well as medical advice regarding swallowed gum.

Gum is a choking hazard

According to the American Academy of Pediatrics, “ choking is a leading cause of morbidity and mortality among children, especially those who are 3 years of age or younger.”

Young children’s airways are vulnerable because of a smaller diameter, and even a slight build up of mucus or foreign bodies in the airways can have a significant impact on air flow. Additionally, if a young child coughs to try to dislodge a blockage, the force of air is less likely to be sufficient to do so.

Chewing gum is considered to be a high-risk food when it comes to choking. In fact, “nineteen percent of choking events are caused by candy or gum.”

Chewing gum is dangerous because it is not food easily chewed into smaller pieces, meaning it is swallowed whole. And, it is a compressible food (like many other man-made foods), so it can easily conform to a child’s airway, get stuck and form a seal.

While digestive blockages may occur less frequently than choking incidents, they also have significant consequences.

Swallowing one piece of gum isn’t usually a cause for concern. But, when either a large mass is swallowed, or when many smaller pieces are swallowed frequently (which is more likely for young children), the digestive tract can become blocked.

What makes a blockage more likely to occur is when the gum is swallowed along with other items . For example, instances of digestive blockage have been found to occur when gum was swallowed at a similar time to coins or even sunflower seeds.

Swallowing chewing gum with foreign objects or nondigestible materials causes a non-digestible lump to form - called a bezoar. These bezoars are more likely to become stuck in children’s intestines, rather than adults’, because their intestines are narrower.

The American Academy of Pediatrics published a report on three case studies of bezoars in children ranging from 1.5 to 4.5 years of age, all involving chewing gum. In these cases, initial symptoms presented as constipation, coughing and difficulty swallowing.

In order to clear the blockage manual disimpaction was needed in two cases and coin retrieval under endoscopy in the third case (where four swallowed coins had been adhered together by gum).

All cases resulted from the children being regular gum users . In two of the cases, parents revealed it was given daily as part of a reward or positive reinforcement system, with children usually swallowing the pieces.

The sucrose often contained in gum is metabolised by oral bacteria . These bacteria, in turn, “ produce dental biofilm and acid , which can lead to enamel demineralization and caries.”

Giving toddlers chewing gum that contains sugar can therefore start to degrade the enamel of their teeth at such a young age. Even though they only have “baby teeth” at this stage, it’s important to look after your children’s teeth from the beginning and instil good dental hygiene habits.

Gum sweetened with sorbitol can cause diarrhoea

Sugar free chewing gums often contain sorbitol as a sweetener. Both an intolerance to sorbitol and an overdose of sorbitol can result in symptoms like gas, diarrhoea and abdominal bloating. In fact, sorbitol is commonly used as a laxative.

A study of 25-35 year olds found that many subjects experienced these gastrointestinal symptoms after consuming between 10-20 grams of sorbitol. It could be assumed that for toddlers, far less sorbitol would be needed to cause such effects, keeping in mind that the average stick of gum contains 1.25 grams of sorbitol.

You can’t expect toddlers not to swallow gum

The most important takeaway from this article is that toddlers shouldn’t swallow chewing gum. But, understanding why they shouldn’t swallow it , well, that’s a big problem for toddlers. It’s all down to how their brains work.

As paediatrician and author, Dr. Laura Jana points out: “2-year-olds simply have not yet developed the ability to think through their actions , consider consequences or consistently follow rules”.

That’s why we cover our power points, keep sharp objects and dangerous chemicals locked away, and why we should not give our toddlers chewing gum. We simply can’t expect them to follow the rules all the time because they are not developmentally capable of it.

Nitin Gupta, paediatric gastroenterologist at Sydney Children's Hospital, provides some advice to parents in an article published by abc.net.au.

Firstly, you should mention it to your GP if your child is constipated and you are aware they have swallowed chewing gum.

Secondly, take your child to the emergency department immediately “if swallowing gum is accompanied by lots of drooling, or severe discomfort or uncontrolled vomiting (yellow or green)... as this may indicate a chewing gum related blockage.”

Finally, do your best to prevent these situations ever occurring and don’t give your toddler chewing gum.