Everything You Need To Know About Toddler Growth Spurts 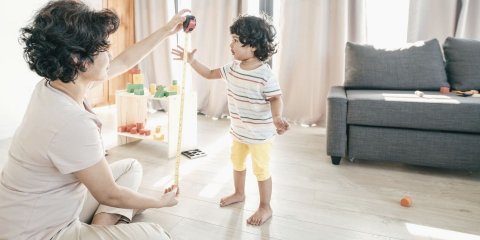 “Oh, your toddler’s cranky? Hungry more often? They must be going through a growth spurt!” Have you heard this before?

It had me wondering … Are growth spurts and everything we associate with them scientifically proven? Or are they just an old wives’ tale?

I decided to find out and share the scientific research with you here. 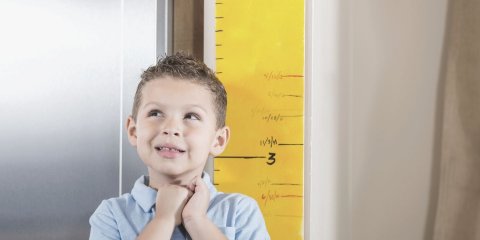 But an easier way to understand this is to think about the first stage of growth (from birth to age 3) as an upside down triangle. Growth is constant, but slows.

In terms of weight gain, from 12 months old to 5 years old, toddlers put on around the same amount of kilograms each year. It’s been found that until 4 years of age, girls grow slightly faster than boys .

Because toddlers are so much more active than when they were babies, their energy expenditure increases and they start to appear less babyish and more lean.

What is “normal” growth?

While it can be easy to fall into the trap of comparing your child to others, this isn’t the best way to determine if your toddler is growing “normally”. As part of your toddler’s regular health checks that usually occur alongside their immunisations, your GP, paediatrician or child health nurse will plot their height and weight on growth charts (which you’re probably familiar with).

But, it’s important to remember that any single growth point is an ineffective way to establish if growth is, in fact, “normal”. That’s why children are regularly monitored from birth. Because a series of consecutive points must be plotted in order to determine a growth pattern . And it’s this pattern that demonstrates if your little one is growing appropriately.

Unfortunately, it’s been found that “many parents believe that greater infant weight is an indicator of good infant health and higher levels of parenting competence.” This can be an unhealthy preference for parents to have. “The World Health Organization recently estimated that 22 million children below the age of 5 are overweight .”

What is a growth spurt?

What is a growth spurt? Growth spurts are a normal part of development where physical or cognitive abilities (or both) surge ahead. They don’t just happen to toddlers, but throughout childhood and adolescence. The physical is often just thought of as height changes, but also encompasses changes to build, like the elongation of their legs.

The cognitive aspect of a growth spurt means that neural pathways are being reworked and refined so that development of things like language, emotional intelligence and motor skills can occur.

It’s important to emphasise here that each toddler’s developmental path is unique. That being said, the work of Dr Arnold Gesell and others at the Gesell Institute of Child Development have studied and provided valuable insight into development patterns. Rather than “growth spurts”, Gesell and colleagues theorised there are periods of equilibrium and disequilibrium , a rollercoaster of sorts.

What we know as toddler growth spurts, are the developmental periods of disequilibrium . As they are growing immensely (physically and cognitively) growing during spurts, and undergoing great change within themselves, it’s no wonder toddlers can seem off kilter.

It’s more easily understood when you look at this diagram of the cycles. But remember that it might not look exactly like this for your child. 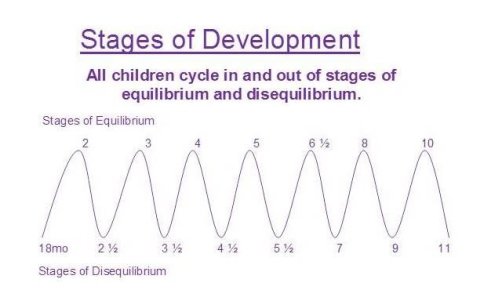 The Center for Parenting Education website provides an excellent summary of what periods of equilibrium vs. periods of disequilibrium might look like for your child, to help you understand what they are going through during toddler growth spurts.

The specific signs of a growth spurt or period of disequilibrium

The table from Center for Parenting Education gives a great view in broad strokes of what a growth spurt might bring about for your toddler. But, how might this show up in your daily life?

Here are a few examples of life with your toddler that may be affected:

Toddlers are only beginning to learn what it means to regulate their emotions and behave “appropriately”. When there is so much going on in their brains, like during toddler growth spurts, it can be easy for them to become overwhelmed and be more likely to have a temper tantrum. 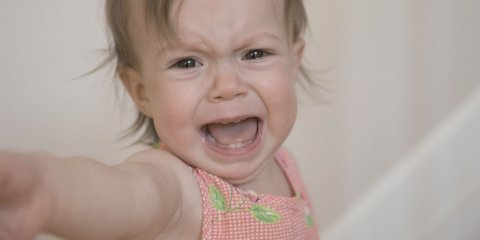 We know as adults, that we can have trouble regulating our emotions all the time. During periods of high stress we are more likely to snap at a loved one or have an out-of-character outburst.

Remember that your toddler’s stressors are really occurring on the inside right now, so might not be something you can easily identify.

Think about what happens to your sleep when you’re going through a difficult time or even one of change. Some might be more inclined to suffer from insomnia, while others prefer to sleep more when growing , with stress making them feel more fatigued.

It's no different for our little ones. Even though we’re told that developmentally they’re capable of sleeping through the night once they’re toddlers, many parents notice periods of increased wakes in their little ones , or that they have difficulty falling asleep during toddler growth spurts .

Although it’s difficult to say with 100% certainty that growing pains exist , research points to it being likely they do. Professor Joshua Barns writes that growing pains are: “intermittent (non-persistent) aches of muscles (not joints) in both legs presenting later in the day or evening (disappearing by morning) in an otherwise healthy child generally between the age of three and 12 years.”

It will probably be difficult for your toddler to explain their pain to you, but it seems that “ growing pains occur in between 3% and 49% of children .”

Keep in mind that some little ones will appear to experience these signs of toddler growth spurts more mildly than others.

Now that you know a few of the signs to look out for, what can you do to help your toddler cope during this time?

Try to remain as calm as you can. This is easier said than done when your toddler is on meltdown number three and it’s not even 8am. But, research supports the theory that children who are raised by parents who are able to regulate themselves well and not overreact are better able to regulate their own behaviour as they develop. They are also less likely to exhibit problem behaviour when they reach school age.

There are currently a few ways to manage symptoms of growing pains . You might like to try massaging your toddler’s legs, or having them perform gentle leg stretches twice daily. Heat application, via a heat pack can also be useful.

Please seek medical attention to rule out more serious conditions if you are concerned about their pain.

First and foremost, keep to your normal bedtime routine. It’s so important for children to know what to expect, even more so when they are going through a period of change like a growth spurt.

You could try an earlier bedtime to give them the opportunity to get a little more quality sleep.

And more hugs may help! Especially if they are waking in the night. This is because hugging helps to create a relaxed state that triggers oxytocin (the feel-good chemical) release.

We hope this better prepares you for your toddler’s next growth spurt.