When Can Kids Have Popcorn? 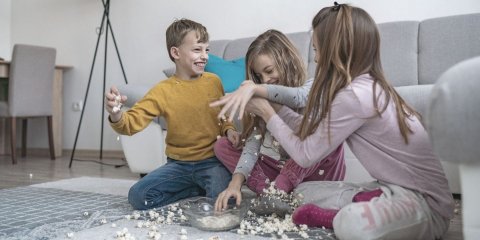 When you’re having a family movie night it seems perfectly natural to pop some popcorn and share it around with the kids.

Popcorn is a food we tend to eat when we’re having fun, that’s for sure. But, is it actually safe for kids to eat popcorn? When can kids safely have popcorn?

Many parents aren’t aware of the dangers of young children eating popcorn. It’s not as talked about as, say, the dangers of hot dogs, which “accounted for 17% of food-related asphyxiations among children younger than 10 years of age in a 41-state study.”

But choking and aspiration are real dangers when it comes to young children eating popcorn. And so, it’s recommended that kids can only have popcorn when they are at least four years old.

Why babies and toddlers are more vulnerable to choking and aspiration

There are many factors that influence the risk of choking or aspiration. Babies and toddlers are at a disadvantage anatomically-speaking, because they have much smaller airways that can easily become blocked.

They are also immature chewers so may not be able to grind certain foods down well enough to prevent blockages occurring.

With underdeveloped reflexes and body strength, a baby or toddler is less able to get themselves out of trouble than an older child.

The stage of a child’s development and their eating behaviour also contributes significantly to the level of risk. For example, a 10-month-old would be at much greater risk than a 3-year-old of choking on food, in terms of development. However, this may not be true if the 10-month-old were seated, supervised in a high-chair, but the 3-year-old was running around eating. In that instance, the eating behaviour of the 3-year-old would be of concern.

What are the top 10 foods associated with fatal airway obstruction

Data from 48 children’s hospitals around the world revealed the 10 foods most commonly associated with fatal airway obstruction. They are:

It is the individual characteristics of these foods in particular that makes them such a risk for young children to eat.

For instance, “ foods that are small , smooth or slick when wet” may slip through to the throat without being chewed. It’s not only round foods that cause choking, but rounded and/or compressible foods do tend to seal off the flow of air when they become stuck.

Why popcorn is a choking hazard for children under 4 years

Choking occurs when a foreign object is lodged in the throat or windpipe, cutting off air flow, and the flow of oxygen to the brain.

When it comes to popcorn, it’s the kernels, specifically, that make it a choking hazard for young children. These very hard kernels may be whole, or just half-popped.

Kids under 4 are considered immature chewers, as they don’t have the back molars required to grind down the kernels enough to make them safe to swallow. And so these hard, slippery kernels can slide right into the throat and become lodged there.

Why popcorn is an aspiration hazard for children under 4 years

Aspiration occurs when foreign objects are inhaled into the windpipe or lungs, instead of passing into the esophagus for digestion. This results in breathing difficulties and infections like pneumonia.

Peanuts are most commonly aspirated , followed by “meats, sunflower seeds, popcorn and carrots.”

Popcorn is an aspiration hazard because of it’s small, dry pieces that can be easily inhaled.

Safe snacks for children under 4 years

Now that you’ve learned about the considerable risks of popcorn, among other foods for toddlers, you might be second-guessing what you are feeding yours. That’s why we want to cover safe snacks for toddlers, so you can continue to provide food for them with confidence.

Even if you only give your child “safe” foods to eat, their eating behaviour can put them at increased risk of choking. It’s recommended that children only eat when quietly seated (preferably at a table). They should be encouraged to chew slowly and thoroughly - not to rush their meal.

Running, walking, climbing, and crawling are all dangerous behaviours while eating. Talking and laughing can even be risky.

As for what you can do, it’s recommended you learn how to provide early treatment if your child does start to choke and also to always supervise your little one while they eat.

Final thoughts on when kids can have popcorn

With popcorn being one the top 10 foods associated with fatal airway obstruction, it simply isn’t worth giving to children under age 4. Choking and aspiration are very real dangers.