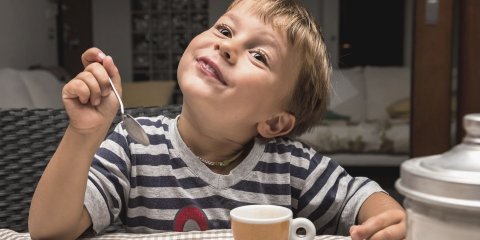 Has your child been asking to drink coffee? Maybe one of their friends is allowed to, or they are just desperate to have what you’re having.

If you’re someone who drinks several cups a day, you may be thinking, “what’s the harm?” But, because caffeine is a stimulant to the nervous system, it’s important to look at the very real effects it can have on the body before deciding if you’re ok with your kids drinking coffee.

Can kids drink coffee? There’s no clear agreement from experts and government health institutions on whether kids can drink coffee, but most suggest that very young children shouldn’t drink coffee, and it’s best to wait until kids are at least high school-age.

Why do kids want to drink coffee?

Coffee drinking has evolved from the mundane world of drinking bitter cups of instant coffee in the office, to a trendy, boutique-style affair. After all, there’s now a coffee to suit every taste. And the people who don’t drink some kind of coffee are few and far between.

There’s the social aspect too. You can sit in a cafe and catch up with friends, or grab a coffee to-go and stroll.

It’s no wonder that kids want to be part of the coffee-drinking scene.

The question is: should they?

How many kids are drinking coffee?

More Australian teens and kids are drinking coffee than ever before. In fact, it’s been reported that a few kids as young as 2-3 years old drink coffee , and 15% of Aussie teens drink coffee regularly.

In America, figures are even higher, with as many as 37% of teens drinking coffee every day .

What are the health effects of coffee consumption?

Caffeine stimulates the nervous system. While this may help to keep us adults alert (and functioning!), the effects on children are less clear, and indeed less researched.

General consensus among health professionals is that young children shouldn’t drink coffee. There’s simply no need for them to, and drinking coffee can even cause or exacerbate some health concerns. For example:

By its very nature, caffeine is acidic, so drinking coffee decreases tooth enamel . This is of particular concern for children whose adult teeth have recently come in. New tooth enamel takes a couple of years to harden fully, so consuming coffee can interfere with that process.

But, it’s not just the caffeine you have to worry about. Many coffee drinks, particularly the specialty ones, contain large amounts of fat, calories and sugar . Frappuccinos are notorious for this, and can contribute to cavities forming.

Too much caffeine can affect not just the ability to fall asleep (causing delayed sleep onset), but also restlessness causing night waking, and the inability to enjoy uninterrupted sleep.

Children have higher sleep needs than adults, and it’s important they get enough sleep to support their growth and development. If your child already drinks coffee, it’s worth considering whether caffeine has been compromising your child’s sleep?

Coffee induces satiety , which means those consuming coffee may not eat enough nutrients. This is particularly concerning as children require nutrients for adequate development - and coffee could interfere with that.

Caffeine may cause hyperactivity

Coffee stimulates the nervous system, which is great for increasing alertness or energy while you’re driving or having a busy day. But for children who are required to sit in classrooms and pay attention for hours at a time, it means they can have trouble concentrating . And so, caffeine consumption may affect learning, classroom behaviour, and of course, grades.

Bedwetting is usually considered normal up to around age 5. But, as a diuretic, caffeine consumption may increase bedwetting in 5-7 year olds. This has ramifications not just in the act of bedwetting, but for the child’s self-esteem and of course, the disturbance it causes to sleep.

What do the experts say?

There is no clear consensus from health authorities when it comes to caffeine consumption for children and an answer to the big question of whether kids can drink coffee. Coffee consumption has been well-studied in adults, but unfortunately, not in children.

For example, the European Food Safety Authority presented their Scientific Opinion on the Safety of Caffeine, stating, “ Daily caffeine intakes from all sources up to 400 mg per day do not raise safety concerns for adults in the general population, except pregnant women.”

However, they determined that there was insufficient data to form a safe baseline of caffeine intake for children and adolescents.

And a review of recent research into the relationship between coffee and health states that the limited research into caffeine consumption by children has predominantly focused on behavioural effects, so there is not currently a complete picture of how caffeine affects childrens’ health. The studies reviewed show that “ higher doses have resulted in some behavioral effects , such as increased nervousness or anxiety and sleep disturbances.”

Health Canada offers guidelines on caffeine consumption that include:

These guidelines take into account the fact that “ caffeine has a dose-response effect. ” In other words, “because children are smaller in body size, it takes less to impact their functioning.” That means, generally speaking, kids are more sensitive to the effects of caffeine. In fact, they can feel its effects for up to 6 hours .

So when can kids drink coffee?

Although Health Canada offers guidelines for the safe amount of caffeine which can be consumed at particular ages, Australian experts tend to advise waiting until at least high school.

This is the case for the The Australian Guide to Healthy Eating canteen guide which makes the recommendation for consuming any type of coffee-style drink only upon reaching high school .

Something important to point out is that it isn’t just about waiting until a particular age to allow your kids to drink coffee. You should also be taking into account their overall daily caffeine consumption - not just coffee. If they are already consuming caffeine in other products, like cola drinks, energy drinks and chocolate for example, then you should think twice about allowing a regular coffee habit to sneak in there too.

What alternatives are good to offer children?

If you decide not to allow your child to drink coffee, it might be helpful to soften the blow by giving them an alternative treat. Here are few ideas and the ages these are most suitable for:

Babycino: This cafe-style treat of frothed milk with chocolate on top is particularly great for toddlers and young kids due to its mini size.

Warm milk with honey: This is another toddler-friendly option. Please note it’s not recommended that children under 12 months of age consume honey.

Herbal teas : These are a good caffeine-free option, for young, healthy children, although it’s important to research the specific ingredients of the one you’re offering.

Decaf coffee: This option is best for teens. However, please try to limit the sugar.

Final thoughts on whether kids can drink coffee

Just because the long-term research isn’t there to definitively say that kids shouldn’t drink coffee, doesn’t mean it is a good idea.

In the interests of all aspects of their health and wellbeing, the bottom line is, it is best if you can wait until at least adolescence to allow your kids to drink coffee.

If fatigue is the reason behind your kid’s request to drink coffee, and they feel like they need it to get through the day, then it would be worth consulting your doctor to address this.